This, when finished, will be a scarf. All I need to do is repeat the pattern six times.  OK! Well.  Firstly I needed to buy the wool, Rowan’s best – from English sheep, I learned was held in their warehouse in Germany.  This put the project back two months whilst waiting for the wool to be delivered.  OK – Why not keep our wool in Germany? After all, we ARE part of the Common Market.  Rowan HQ by the way, is in Holmfirth, West Yorkshire.  Not too far from where I live.  AND the old mill there used to be where the wool was spun and bound into balls, after all Holmfirth is in the middle of Mill country, sheep rearing country, where worsteds were woven through the centuries.  I don’t think the people of Holmfirth were too impressed to find their jobs being transferred to Germany.  But, heck.  We are ALL part of the EU aren’t we?  Mustn’t grumble about our heritage work being transferred to Germany, after all, the mill would have employed mainly women, so it doesn’t matter if they lose their jobs does it?  I mean – I expect the village of Holmfirth will be able to provide employment for those made redundant.

Anyways – once I’d received the wool I found it was 2ply, thin stuff.  Big sigh.  This project is going to end up like my cross stitch patchwork cushion that became a major project in the 1970’s – nearly took the ten years of the 70’s to complete.

Then, of course I have the battle for my space on the sofa to deal with as well.  Beth is laying claim to the sofa.  Whenever I sit down she wants my space.  I then move to let her have the part I have warmed, which she immeiately moves onto, stretching to take up at least two thirds of the seat. 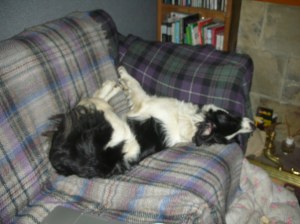 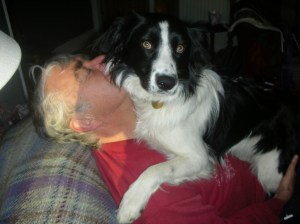 Well.  To be truthful, this is Beth’s designed total takeover of both the sofa and Jim’s chair.  So, being left with a miniscule space to knit I am finding it hard to manipulate the narrow, slim knitting needles.  As soon as I start to knit, and, in particular when I reach a difficult part requiring attaching new wool colours and counting, Beth turns herself and plonks her head on my knee, dmanding 100% attention and love.  So – it is debatable when this scarf will be finished.  Perhaps I ought to leave it to someone in my will.  Any offers?

I write for fun, and sometimes wonder why. Then an idea captures me and takes over my life. View all posts by beedazed